Oh How Far We Have Come…

And yet we sill have so far to go, but the exact length of our road remains to be seen…

Since our saga returned in April we have had five thrilling instalments, tales of courage, intrigue and bloody violence. It has been nearly three months since our last recap, that’s one-quarter of a year. That’s quite a while. The minds of men are fragile and fallible things, not like they were in the Old Time. And thus we forget. Things we once knew drift into the fuzzy miasma of obscurity, they pass out of memory and into myth, or legend, or into a vague nagging feeling that there’s something you were supposed to do but you can’t quite remember what. So come, sit down by our fire and let us remind you of that which was and that which has been.

Our tale resumed with a Showdown: our hero, Jala, lunging head-long towards the dread Magebane. The two mighty warriors tussled and fenced, advantage swinging between them with every passing breath. Jala seemed to be immune to the magical agony of the Bastard Sword and seriously messed up Magebane’s face. But through luck and cunning artifice, Magebane shattered Jala’s sword and promptly smacked her up-side the head with the rim of her shield. This, rather unsurprisingly, caused Jala to space-out a bit (technical, medical term.) While she lay insensible she had one of those fancy “dramatic flash-back” things which the wizards of the Holly Wood are so fond of.

During this, Jala received some sage advice and practical wisdom from her dear old mum: “Go down swinging.” She may have also heard the voice of the now tragically dead Freya, but head injuries do funny things to the brain. Either way, Jala found her second wind and Magebane suffered what would prove to be a fatal reversal of fortune. Being of a generally villainous persuasion, Magebane could not resist the urge for a bit of monologuing filled with ominous foreshadowing. Jala, starting to get a bit fed up with all these tired and worn-out tropes responded by ripping out her throat with her bare hands. You know, as you do. Reunited with Kru and the rest of the gang, Jala discovers that she might have been a little hasty and that brutally murdering Magebane might not have been the best of ideas. As it turns out Magebane’s boss was someone called “The Whelpslayer” and that it’s very likely that he might be “up to something.”

Being a little tired from her scuffling and massive internal haemorrhaging, Jala’s body decided that the best course of action would be to spend the next week in bed. Feeling a lot better now that her lungs and thorasic cavity aren’t slowly filling with blood, Jala gathered up Kru, Marek and the mysterious Guildmeister (who turned out to be called Tim) and joined a merchant caravan. Their destination? The Ghormish Barrens and the Heldrakai Necromancers from beyond the Gash. The plan being that they could use their dark and arcane magics to wring answers from Magebane even though she is very, very dead (necromancers are handy like that.) This was the preferable alternative to a blind assault on Radgerock and the Dragonkeep of The Whelpslayer. As that seemed like a terminally bad idea. 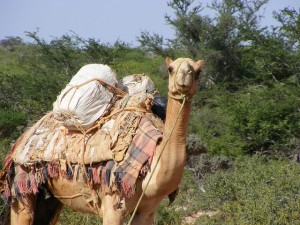 At the caravan they encountered an aspiring literary figure by the name of Hervel who wanted to interview Jala so that he could spread the word about her exiting exploits. Jala, not being a fan of the popular press, politely told him to bugger off. Our intrepid band then set off across the desert towards the land of Ghorm and discovered first hand that 1) camels are uncomfortable, and 2) there is a lot of sand in the desert. Like, a lot of sand. Riding across the desert is hard work, so the caravan decided to make a pit-stop at an oasis, what with oases basically being the motorway service stations of the desert. Naturally nothing is ever straight-forward. What was supposed to be an opportunity to stretch their legs and get a drink, quickly devolved into a sandworm attack and strange, shadowy figures mumbling about “answers” and “destiny.”

Understanding this to be the usual twaddle, Jala proceeded to give the sandworm an in-depth lecture on service station etiquette. The sort of lecture you perform with a sword and which is punctuated with lots of shouting. As the caravan neared the border of Ghormish territory their route took them through the ruined city of Cairnobàs. A place of ash and dust and loss. Or as some might view it, a great property investment with fantastic opportunities for gentrification and urban redevelopment. When they reached what was the centre of the city it was revealed that the members of the caravan might not have been entirely honest with Jala and her friends. It transpired that Hervel is actually an apprentice to the Heldrakai and that the caravan is composed almost entirely of shambling undead horrors. Except that camels, they’re just naturally horrific and evil. The now unmasked Hervel offered Jala an audience with his Heldrakai masters and the possibility (but only the possibility) that they might answer some of her questions. Questions about Magebane, The Whelpslayer and why she keeps hearing Freya’s voice. On this rare occasion, Jala decided not to start slicing and dicing the cryptic a-holes before her. Instead she laid down her weapons and surrenders herself into the custody of the shambling undead horde.

And that, dear readers, is where we now find ourselves. The past behind us and mystery ahead. Anything could happen, for the future is a fickle thing of flux and uncertainty.  But you have the power to shape what happens next. Every story and every path Jala takes yields a decision, a decision which you, yes you, the reader, gets to make. Thrilling isn’t it?

Our exciting crowd-sourced barbarian fantasy adventure resumes next week. Baring unexpected delays, like dragon-attacks, elder gods waking from their aeons long slumber, wraith infestations. You know, the usual kind of stuff that gets in the way of your everyday activities.