Archive for the tag “Secrets of the Heldrakai”

There’s something about Necromancers that makes people uneasy. Hanging out with dead people all the time marks you in some way. It makes you a little bit unearthly, different, other. From a certain perspective this has its advantages. It gives the necromancer an aura of aloofness and mystery that is a very desirable, some might even call it a business asset. It does however make it very hard to get people to trust you. Especially if you’re trying to get something big out of them. Say for example, the rights to their still warm corpse. Which is going to be a bit of a stretch at the best of times. 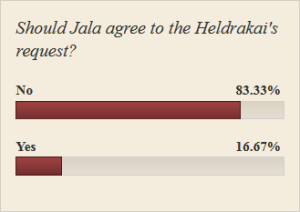 Jala has decided that she doesn’t particularly like the proposal put forward by Master Wojji, which I suppose is entirely understandable. Bodily autonomy is kind of a big deal. Even when you’re dead. This does mean that she’s going to have to find some other method of payment or leave empty-handed.

Exactly how this all pans out will be the decision of Sam Kurd: adventure, dreamweaver, visionary (plus writer.) We’ll be entering the world of his imagination as he takes us on a majestic odyssey of fiction and wonder. Which is more impressive than the brief he was originally given. (Which read “Oi, you! Write something.)

The next chapter in our ongoing tale will arrive on Monday the 4th of August.

Part 27 – Secrets of the Heldrakai

“So the dead told you that we were coming?” Jala asked incredulously.

“They are necromancers Jala, you needn’t sound so surprised.” Replied Kru.

“Talking to the dead I can believe.” said Jala “It’s the fact that they’d be talking about us that I find hard to swallow.”

“Well” began Wojji “The dead have very little to do other than watch the living, and they do so love to gossip. All we do is, eavesdrop on their ethereal chatter. The denizens of the spirit world have a particular liking for the ‘Big Fish’ of the world, the movers and shakers. When we heard Magebane’s spirit gong ring it was pretty much guaranteed that someone would be coming our way. She always struck me as particularly tight-lipped.”

“What exactly is a spirit gong?” asked Jala.

“Yes, I suppose not many outside our sect will have heard of them. It’s a captive geist which strikes a gong when the person it is attuned to dies. We have them for quite a variety of people: Kings, queens, tyrants, politicians, warlords, or any one who we find moderately interesting in a socio-geopolitical sense.”

“So when her gong rang you started asking around.” Said Kru.

“Indeed” replied Wojji “Nothing all that mystical about it really.”

Wojji led them past arches and recessed colonnades, and finally to a grand, almost palatial staircase cut into the bone-white rock of the canyon.

“If you’d care to follow me to my office we can continue this conversation over refreshments. The dead will see that your luggage is dealt with accordingly.” said Wojji as he began to climb the stairs. The small horde of dead marched past the stairs and vanished into one of the many tunnels which dotted the canyon floor.

The veranda at the summit of the stairs led into a vaulted corridor of ascetic simplicity. The hot and dusty air of the barrens vanished as they crossed the threshold, being replaced by the cool and funereal elegance of stone and shade. Their footsteps sounded soft and muffled, the rocky corridor not eliciting the echoes one might expect. The necromancer ushered Jala and Kru through a doorway and into large white room with a balcony overlooking the canyon floor. At the centre of the room sat a table of night-black stone, behind which stood a large and imposing throne carved from the same material. One the side nearest the door were two squat white stool blocks which Wojji gestured to.

As Jala and Kru lowered themselves to the stone stools, Wojji perched himself on the edge of the black throne, his frame swallowed by its imposing grandeur and enormity. Almost as soon as he had sat himself down an acolyte in pale grey robes shuffled into the office carrying a large ceramic jug and three glasses. After setting the refreshments down on the table, the acolyte shuffled out of the room with nary a word. Wojji filled each of the glasses, the crystal clear water pouring from the jug in a thin and sparkling stream. He placed the jug onto the table and leaned back in his throne, steepling his fingers.

“So…” he said “I suspect you have questions.”

“What can you tell me about Freya?” Jala blurted.

“Ah…” replied Wojji, before lapsing into a heavy and nervous silence. He rose from his throne and paced over towards the balcony.

“That one, she is a puzzle.” he finished.

“Hervel told me you could give me answers.” said Jala quietly, her voice poised somewhere between anger and sadness.

“I do not know what that fool Hervel promised you, but on the subject of the girl I can only offer you more questions, not answers.” Replied the necromancer.

Jala flung herself to her feet, rage building in her heart. Kru reached out and touched Jala’s arm, a gentle, yet firm touch that spoke of patience and restraint. Kru slowly guided Jala back into her seat.

“Tell us what you can.” Asked the Star Witch in a voice like butter and honey, yet still suffused with an imperious and commanding tone.

“Her gong did not ring.” began Wojji “But she is dead all the same. Even the greatest amongst our Listeners fear her, though they do not know why. In the depths of their wizard sleep they speak her name with equal parts awe and dread. They mutter of a great power growing in the beyond, one which they cannot fully understand.”

A wry smile flashed across Kru’s face and was gone in the blink of an eye.

“What does that mean?” asked Jala

“Before I answer that Mistress Jala, let me just say that there are no secrets from the Heldrakai. We know all that is, all that was, and a significant portion of all that will be. Our knowledge is as close to omniscience as any mortal thing will ever come. Our sages have mastered and understood secrets long since forgotten by men and gods.”

“And your point?” asked Jala.

“I just want you to be fully aware of exactly what it means when I say: we do not know.”

“You don’t know?!” Jala shouted, slamming her fist onto the table.

“No.” he replied “And it truly pains me to admit it. All we can recommend is that you both remain weary of what the future might hold.”

“Magebane however, is another matter.” Wojji continued, as he returned to his place on the black throne. “I’ve already arranged an appointment with Sonja, one of our best and most promising Listeners. She should have no trouble answering any questions you might have regarding Magebane, or her employers.”

“How much?” asked Kru

“There is always a price, what is yours? You said yourself that necromancy was inherently transactional.”

“Yes, I suppose I did.” he said, stroking his chin. “For a request of this nature and for the substantial risk our sect is undertaking by granting it, we would ask for the body of mistress Jala.”

Jala’s eyes blazed with anger as she fixed Wojji with a stare that would melt steel.

“I don’t mean anything sinister by it. Simply that you agree to donate your body to our sect after your inevitable demise. We would ask for the Star Witch’s, but based on historic events I don’t think that would be a debt we would ever be able to collect.” Said Wojji with a chuckle.

“ This seems a somewhat extortionate payment.” replied Kru “I know well what magic could be wrought from the corpse of one such as Jala. Do you truly fear the Whelpslayer so much.”

“We are not concerned by the Whelpslayer, we are concerned with what might come after. You have seen the visions.” He said turning to Jala “The hints of possibility; the foreboding gloom; the smoke and fire; the charnel wasteland which could yet be. We do not enjoy dealing with uncertainty and matters of such flux.”

Wojji produced a curved dagger from his belt and offered it, hilt first, to Jala.

“Do we have an agreement?” he asked.

The poll will close at noon BST on Sunday 27th of July. If you cannot see a poll above, please try enabling cookies or using a different browser. If this does not work then you are clearly cursed and probably have bigger problems.

Posted by The Rogue Verbumancer in Adventures, Polls and tagged Foreshadowing, Freya, Jala, Magebane, Secrets of the Heldrakai, The Gash, The Heldrakai, The Star Witch, The Whelpslayer | Leave a comment